WATER BOTTLES IN THE SEA, THE BIG THREAT FACING THE OCEANS

THE IMPORTANCE OF SEAS AND OCEANS

Seas and oceans cover more than the two thirds of the planet’s surface. It is for this reason that the earth is known as the Blue Planet. In its waters we can find many forms of life, from planktons and aquatic plants to big whales. On the other hand, oceans also have a fundamental role in the cycle of water, in the chemical composition of the atmosphere and in the regulation of the climate. Since many centuries, us humans, have been exploited the resources that the sea offers to us and we have been using it as a transportation mean for merchandizes and people…and even as a garbage dump. The waste thrown in the sea is dangerous for the fauna but also for our specie. The plastic rings that hold cans of drinks together manage to tangle and asphyxiate animals. Plastic bags are swallowed by turtles and some fishes because they mistake them for jellyfishes, they are therefore deathly. Plastic bottles in the sea ended up forming absolute garbage islands.

PLASTIC BOTTLES IN THE SEA ARE POLLUTING

Plastic is one of the most polluting material for the ocean. We are talking about a material that could take up to 1,000 years to biodegrade. For the first time a study lead by the prestigious magazine Science, quantifies the plastic that ends up in the oceans; more than 8 million tons of plastic bottles in the sea each year and it is estimated that in the year 2050 there will be more plastic than fishes in the sea.

Could we imagine what 8million tons of plastic bottles in the sea each year represents? This same study notices that more than 80% of the plastic waste that reaches the sea comes from a few countries with China in the first place, and also the United States among the first ones.

However, what is sure is that scientists still don’t know exactly where the biggest majority of the plastic waste, that we say is reaching the ocean, is located. A big part would be sunken in the depths of the sea, the other part of the plastic would be floating in the sea, trapped in whirlpools and ocean gyres. At the same time, ocean currents that transport plastic, the wind, solar radiation and the action of the waves are such that the plastic bottles, along with other residues of the same material, are cracking off and breaking into decreasing fragments, producing what we call micro plastics. The amount of micro plastics in the ocean is extremely difficult to quantify. They are minute, very hard to eliminate and end up being part of the marine food webs when ingested by fishes. On top of directly acting in the mortality of aquatic animals, they can also affect humans that eat them. 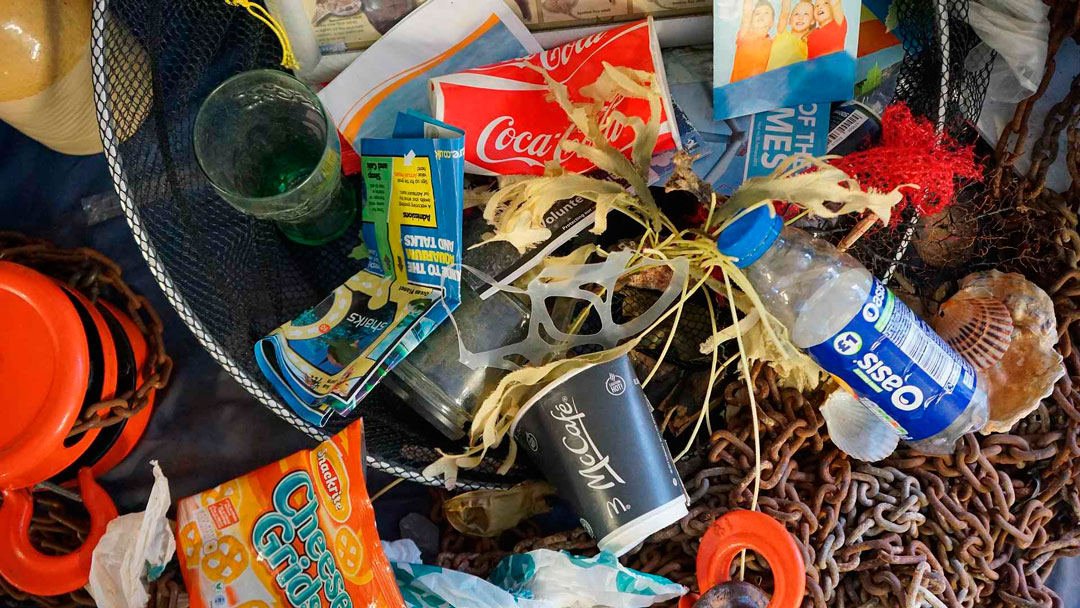 THE SIXTH CONTINENT, THE TOXIC ISLAND

Among the five gigantic plates of plastic waste held by ocean vortexes, ocean currents have almost solidified the one of the east zone of the North Pacific. Known as “the sixth continent” by some, this island of plastic bottles in the sea covers a surface of around 1.400.000 km2, almost three times the surface of Spain. These 5 islands or plaques are however only the tip of the iceberg of an environmental problem, given that 70% of the waste ends up in the depths of the sea as micro particles and enters the aquatic food chain.

It has been estimated that 80% of the waste comes from terrestrial areas and 20% from boats. Because the “Toxic Island” is found floating in international waters, no one takes responsibility of the waste and there is no government held accountable. 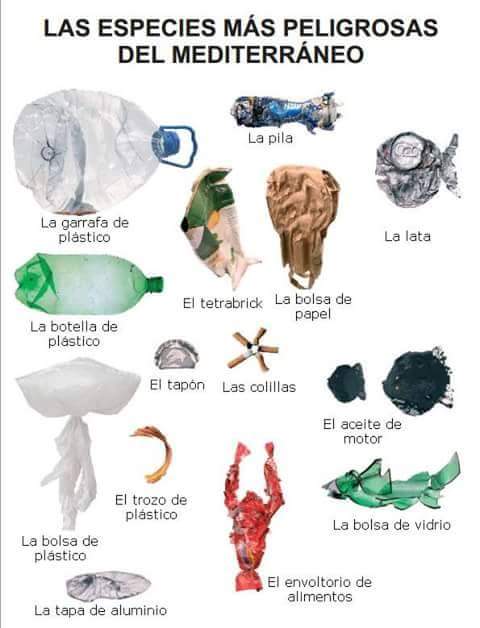 It has been known for a long time that fishes swallow big amounts of micro plastic, but what wasn’t known is that fishes eat them with pleasure.

In front of a small piece of plastic, the larvae of fishes chose that rather than planktons, their natural food. Larvae undergo the consequences of their choice, they grow up slower and move less fast and are therefore more vulnerable when facing predators.

A world without plastic, is it possible?

Slowly we are more and more conscious about the importance of reusing plastic bags and containers along with decreasing their consumption, however we could also ask ourselves whether we used toothpaste, exfoliating creams, cosmetics, deodorants, shampoo or shower gel that day…in that case, we would have consumed big quantities of micro plastics. Some of them will be assimilated and others will disappear through sewage until reaching the sea and then be eaten by fishes, which could again end up on our plates.

Fishes are not the only victims of these residues. Some studies note that 90% of birds also have plastic in their stomach.

Currently, micro plastics are used by common brands found in the market as well as by perfume stores or para-pharmacies. In some products they are labeled as micro pearls, even if on the list of ingredients they usually appear as “polyethylene” or “polypropylene”. Some brands have claimed that they will stop using them in the future, others such as those of ecological cosmetics use a green label to indicate that it is a product free from plastic.

It is obviously hard to imagine a world without plastic in the middle of the 21st century. Plastic is invading our lives and has revolutionized the way we eat, drink and stock…and even if little by little recycling is more present within our habits, those residues has become a real piece of work. Some residues that multiply eternally and last a millennium become a big burden for the future generations. It might not be necessary to come up with new inventions but rather reuse materials already used by our great parents.

The solution to this problem is within our hands. There are a lot of campaigns created to raise awareness among people, but it is obvious that there is still a lot of work to do. Promote recycling, manage those residues in a rational way and promote the consumption of products that are respectful of the environment are some of the things that we could do to better this alarming situation.